You Don’t Know Until You Know 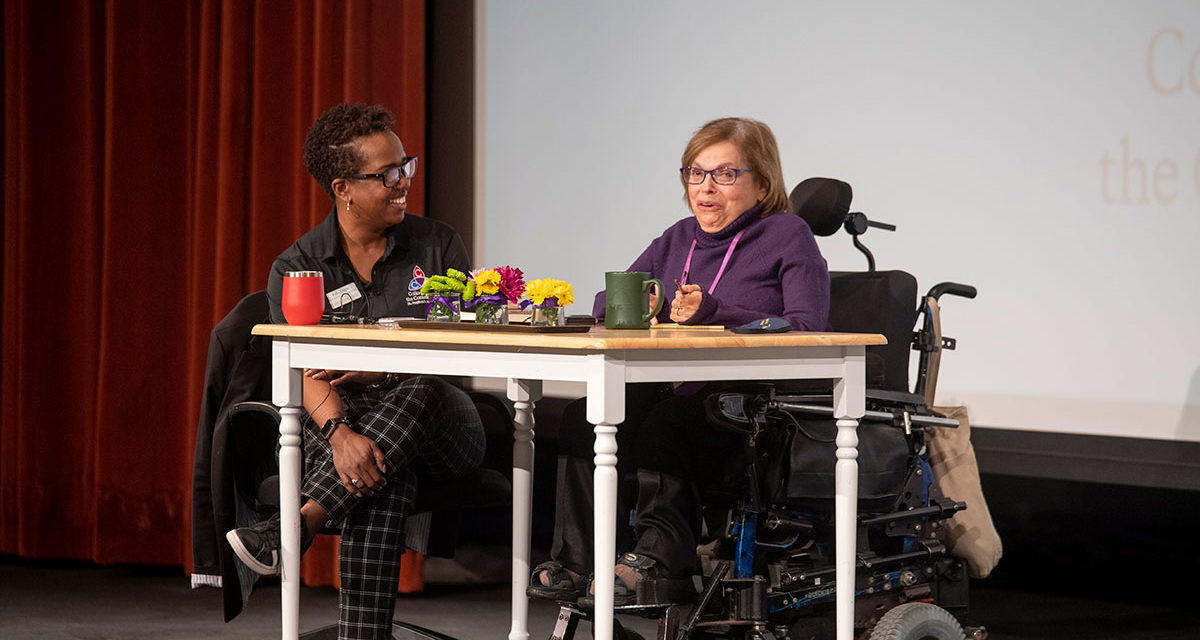 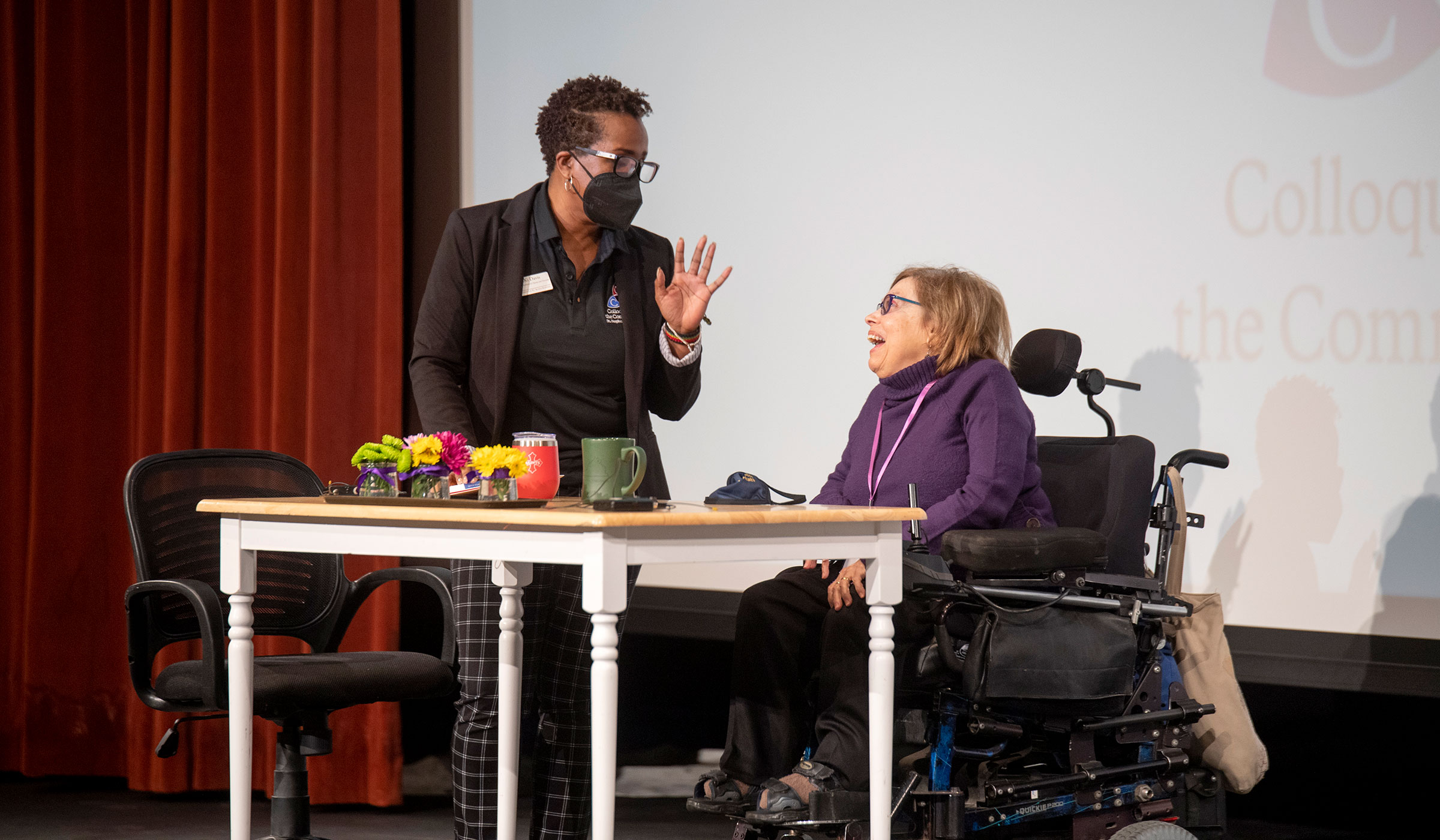 You Don’t Know Until You Know

How Judy Heumann Opened My Eyes

On Monday, January 24, 2022, the Upper School hosted its third Colloquium for the Common Good. Designed as a day of learning and deep thinking around some of the most challenging and important social issues of our day, this year’s event featured 28 different workshops hosted by a variety of outside speakers, alumni, and current teachers from all three divisions. To give you a sense of the offerings, the following are some of the workshop titles:

All Upper School students attended three different workshops and a keynote address over the course of the day which allowed them to explore a variety of ways in which to “pursue goodness as well as knowledge.” For me, however, the most impactful part of the Colloquium was learning from the keynote speaker, Ms. Judith Heumann. Preparing for Ms. Heumann’s visit was an eye-opening experience that proved the cliche, “You don’t know what you don’t know.”

If you are unfamiliar with Judy and her story, please allow me to share a brief biography. Since contracting polio at the age of two in 1949, Ms. Heumann has required a wheelchair for mobility. After being denied access to school at the age of five because she was considered a “fire hazard,” Judy learned from an early age that she would have to advocate for herself and fight against the discrimination of disabled people. Over the course of her life, she has founded several disability rights organizations, held positions in both the Clinton and Obama administrations, worked for the World Bank, and played an integral role in the development and implementation of many key pieces of legislation, including the Americans with Disabilities Act (ADA) and the UN Convention on the Rights of Persons with Disabilities. In 2020, she published “Being Heumann: An Unrepentant Memoir of a Disability Rights Activist,” and she featured prominently in the Oscar-nominated, Netflix documentary, “Crip Camp: A Disability Rights Revolution.”

This is all to say that it felt like a big deal to have a living civil rights legend like Ms. Heumann visit our school and share her story.

You can’t help but feel inspired by Judy’s bravery when you watch “Crip Camp” and see her—along with a couple dozen other disabled people—occupy the San Francisco offices of the Department of Health, Education, and Welfare (HEW) for nearly 30 days in April 1977, in an effort to push the government to enforce Section 504 of the Rehabilitation Act (a law that had passed in 1973).

You can’t help but feel moved by her courage when you see her choking back tears as she tells government officials to their faces that disabled people will no longer accept separate but equal treatment or when you see her and her fellow activists travel around Washington, D.C., in the back of a rented box truck because accessible transportation was so difficult to find. As Judy writes in her memoir, “We were beginning to see our lack of access as a problem with society, rather than our individual problem. From our perspective, disability was something that could happen to anyone at any time, and frequently did, so it was right for society to design its infrastructure and systems around this fact of life. We had grown up with the civil rights movement. I was eight when Rosa Parks refused to give up her seat in the whites-only section of the bus and just starting college when the Civil Rights Act was passed in 1964. Wasn’t it the government’s responsibility to ensure that everyone could participate equally in our society?”

Learning about Judy Heumann’s story and the history of the disability rights movement introduced me to the curb cut effect, according to which investment in one group can have a greater impact on the broader community. So while disabled individuals who rely on mobility equipment such as a wheelchair may need a curb cut to get onto a sidewalk, many other people also benefit from that curb cut whether it is a parent with a stroller, a delivery driver with a dolly, or a teenager on crutches who sprained their ankle in last night’s lacrosse game. Likewise, while the hearing impaired rely on closed captioning, many of us might also benefit from it when trying to keep the volume low or attempting to understand a character with an accent. This concept of the curb cut effect reminds me of Fannie Lou Hamer’s statement, “Nobody’s free until everybody’s free.” While Judy and her fellow activists were fighting for equity, they were also fighting for the common good, for a better world for everyone.

Learning to see the world through different eyes is one of the great joys of working in a school. Whether reading a high school student’s writing or having a short conversation with a kindergartner, I regularly have the opportunity to hear a fresh perspective. Seeing the world around me with a lens for accessibility felt no different.

When Judy Heumann visited “The Daily Show with Trevor Noah” in 2020 and stated that the likelihood of a non-disabled person acquiring a disability even temporarily is high, Trevor Noah responded, jokingly, with “Did you just threaten me?” While that line produced a good laugh, Ms. Heumann’s point should give us all pause at that reality and perhaps even enrich our sense of empathy.

To be clear, disability rights was not the main focus of the Colloquium for the Common Good—as the workshop titles above intimate—but it was the topic that opened my eyes the most. And since Ms. Heumann’s visit, we have started having more conversations about accessibility on our campuses and discussing improvements from which we all will benefit.

Finally, I would be remiss if I did not mention the tireless efforts put in by Director of Institutional Equity and Diversity KiKi Davis and Director of External Engagement and Service Learning David Yee in organizing the Colloquium. It was no small feat to organize the event, and we’ve already started thinking about the next one in January 2024.