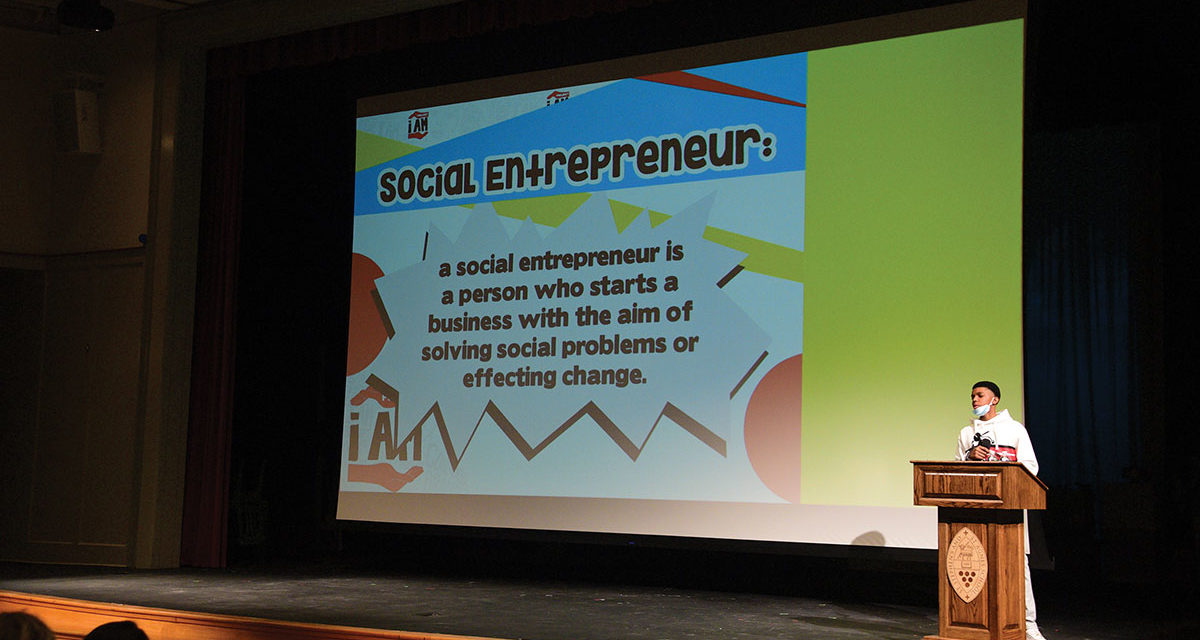 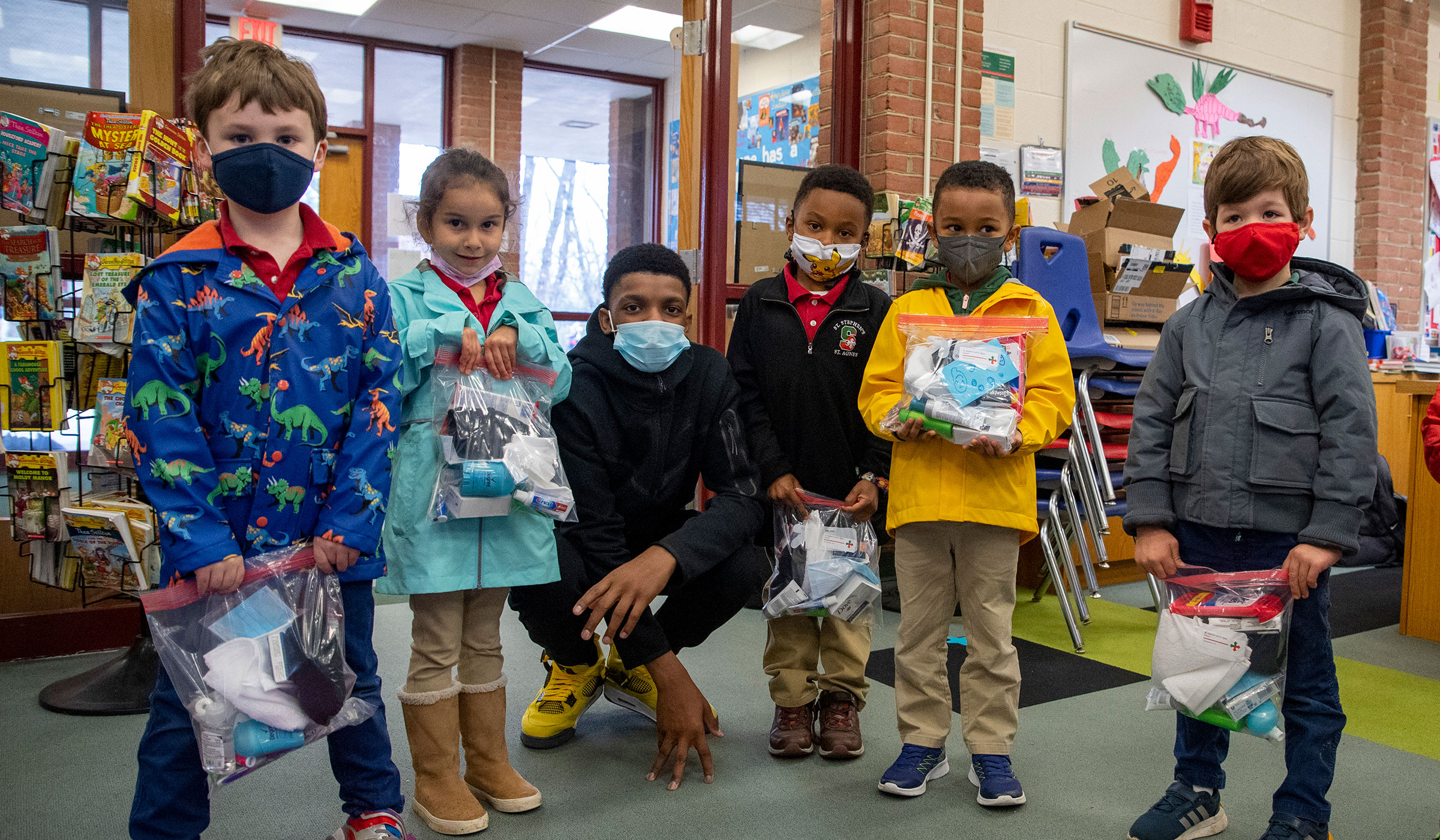 Working for a Better Tomorrow and Making the Mythical a Reality

BY DAVID YEE
Director of External Engagement
and Service Learning

Usually, when we try to find models of inspiration for our students, we look to the news from the world outside of our walls. One such source of inspiration is TIME Magazine’s “Kid of the Year,” and who TIME has chosen for the past two years. In 2020, TIME chose 15-year-old Gitanji Rao who used science and technology to speak to the crises of the day: opioid addiction, dirty drinking water, and more. This past year, the magazine chose 11-year-old Orion Jean who works to combat lack of education access in his local community through spreading awareness and the habits of kindness. These students are chosen because they are exceptional, and TIME highlights them to indicate to people young and old that there is hope for the future. We point to these students to say that there are young people in the world that are working towards a better world, and that our students can do the same.

However, when we read about these individuals in magazines, they often seem far away. This distance becomes dispiriting, and those role models become mythical. Given that, it was surprising when our own associate athletic director, Vashon Winton, reached out to us in the fall to say that he has a cousin who is one of these inspirational young people, a model of Black Excellence, Jahkil Jackson. We were fortunate to host Jahkil, who came to our school to help us wrap up our celebration of Black Excellence and Black Joy during Black History Month. He had become well-known in Chicago and nationwide for his commitment to finding a way to make his community a better place through his “Blessing Bags,” small ziploc bags that contain the necessities like soap or first-aid supplies that the unhoused may not have at their disposal. These bags are ways in which he spread kindness to a community he believed was unseen.

Jahkil shared his story with the entire school through assemblies on each campus during which he gave a presentation and then engaged in a question and answer session. He began by saying that he started his work at the age of eight after puzzling through ways that he, at a young age, could act to make the unhoused feel seen. His parents had explained to him the experiences of homeless people when he was five, and he initially wanted to figure out how to provide housing to all of those who did not have access to it. However, he quickly realized that he was not in a position at such a young age to buy or build houses for those in need. Through a process of problem solving and research with his parents and his local community, he found a small way through which he could contribute. Ever since then, he has been building a new community by giving people who have similar passions the opportunity to help him construct these blessing bags. His community stretched far enough to garner the attention of one particularly influential Chicagoan: President Barack Obama.

Though Jahkil would share that meeting the former president was one of the best moments of his life, in watching him and in following his story, I would argue that one of the more defining moments of his young career has been his response to the COVID-19 pandemic. Though many activities stopped or suffered from the effect of quarantine and social isolation, the pandemic actually gave him an opportunity to build on his idea and grow his community even larger. Since he could not host the creation of Blessing Bags in-person, he hosted virtual “Blessing Bag Parties” where people across the nation and world could join his mission to provide visibility and extend kindness to the unhoused. His platform grew exponentially, and to date, he has helped people create and distribute more than 70,000 Blessing Bags around the world.

Of course, given his mission, he helped our Lower School students to join in this mission as they created more than four hundred blessing bags for our community partner, ALIVE! However, more importantly, his visit and his story provided our students with a model of what it means to strive for excellence. Though our students want to effect positive change in the world around them, oftentimes, they see this task as daunting. First, he demonstrated that no one goes about this daunting work alone. At each of his speeches and throughout the creation of the Blessing Bags, Jahkil did his work alongside his mother and his grandmother. When students asked him who his role models are, he named them. He credits his success to them for empowering him and being constant guides and mentors.

Additionally, Jahkil connects his work to the broader field of social entrepreneurship. Jahkil, who identifies as a social entrepreneur and who teaches classes in this topic to his peers, helped students to see that they should never stop striving towards a world that treats all people more justly and equitably, no matter their race or status. He encouraged them to start small and to keep innovating. A Blessing Bag is a small expression of his overall vision. The end goal for him is not a Blessing Bag; rather, it is to make all people feel included in our collective success. It’s why he saw the pandemic not as an obstacle, but as an opportunity to expand his work beyond his local area. It’s why he’s since identified youth empowerment as a priority, and why he’s lent his voice to combat the pains of childhood bullying. In the end, the more people who feel the acceptance of the world around them, the more people there are who can be vehicles for this change. This vision, of collective success based on careful and thoughtful iteration, is his vision of what it means to be a successful social entrepreneur.

Before the end of his time at SSSAS, he had the opportunity to speak to both our Upper School Social Entrepreneurship Club and our Middle School Social Entrepreneurship class. The Upper School students told him that they see his success as an inspiration, saying that his story was proof that the idea of making a positive difference as a teenager wasn’t just an abstract idea, but something that they could see in front of them. The Middle School students asked him questions about how to do the work that he does when faced with social pressure to be a “normal” student. He didn’t sugar coat his life to either group: he stated that it has been hard having separate ambitions from his peers, and that it hasn’t been the easiest social road. However, it’s by telling his story and helping others through it that he hopes that it will become more normal.

For us at St. Stephen’s and St. Agnes School, it’s about using our platform as a school to demonstrate to students how normal his model of excellence can be and how approachable it is. We don’t need to look for successful role models solely within the glossy pages of magazines, and we don’t need to think of people who reach this success as exceptional. Exceptions seem mythical, and Jahkil was real and breathing in front of us as he posed for countless pictures with the Middle School students as he tried to make his way towards the door. Not a myth, he is a real fixture we can see that exists within our own extended community, and by witnessing his example, maybe we can begin pushing ourselves to reach for that success as well.