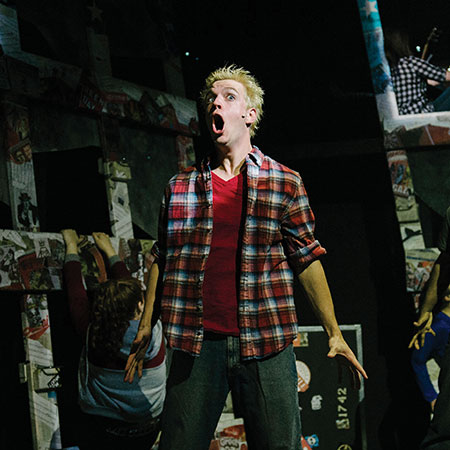 Ricky Drummond started at SSSAS as a long-term substitute teacher in the Middle School…and by the time that role was over, a mutual love had formed. He has applied his easy going, enthusiastic character to a number of jobs, as the librarian’s assistant, a musical co-director, a member of the Fun Committee (yes, spreading joy is of paramount importance!), and finally this year, as the Middle School drama teacher he was born to be! Ricky has a bachelor’s in musical theater from James Madison University, and his main career has been in theater as an actor, playwright, and director. He has graced numerous stages, including the Keegan Theatre, Signature Theater, and The Kennedy Center. The art of teaching was not unfamiliar to him. His mom is a music teacher in Manassas, Va., where Ricky was born and lived in the same house until he left for college. Ricky slipped into education after working with the drama teacher from Robinson Secondary School on a production at the Keegan Theatre, who let him know Robinson was looking to hire an additional drama teacher. He applied and landed the job. He fell in love with teaching kids, inspired by the excitement he witnessed as they learned the craft of acting and prepared to perform. At Robinson he directed 55 students in “The Little Mermaid, Jr.” and thoroughly enjoyed it, learning to celebrate the little victories and to always have a sense of play. Working in the Middle School, many members of the Saints community were amazed to hear Ricky sing for the first time at an all-school event. He has a diverse musical taste, but most often listens to pop, rock, and Broadway. Music is everything to Ricky. For him it is an incredibly versatile language that can explain feelings and situations that words never can, but his greatest passion is theater—making theater, watching theater, and talking theater. Naturally, Ricky met his fiancée, Emily, who was working in wardrobe on a Signature Theater production. She has an equally bright personality and, Ricky says, the absolute best laugh. No doubt he makes her laugh a lot. He is a huge fan of puns and dad jokes and enjoys watching comedies “Ted Lasso” and “Parks and Recreation,” because they are warmhearted, optimistic, and celebrate friendship. The craziest thing he has ever done was agreeing to assistant direct two shows back-to-back, while performing in a third and also directing and playing bass for a new musical he wrote. His greatest accomplishment to date was directing “Legally Blonde” at the Keegan Theatre with a cast of 20 performers and two dogs. The production sold out and was nominated for seven Helen Hayes Awards (D.C. theater’s version of the Tony Awards).

What one piece of advice would you offer anyone who asks?
“Every pizza is a personal pizza if you try hard enough and believe in yourself.”

What is something you could happily fail at?
Not eating cookies when they are placed in front of me.

What is the best piece of advice you’ve ever gotten?
Fight to be kind, don’t fight to be right.

For what in your life do you feel most grateful?
I feel most grateful to have an incredible support system surrounding me. My fiancée pushes me to be the best version of myself, while constantly showing me love. My family has always been there for me whenever I needed them, and they are there at every show. I am also very fortunate to have a number of friends who are basically family as well.

What in life makes you smile?
Seeing family and friends succeed always makes me smile. I love my people, and there is no better feeling than watching them achieve what they deserve and what they have worked so hard to get!

What is something one of your parents said that you will never forget?
My dad shared the poem “Desiderata” with me when I was a senior in high school and I will never forget it. One of my favorite lines is: “Be yourself. Especially do not feign affection. Neither be cynical about love; for in the face of all aridity and disenchantment, it is as perennial as the grass.”