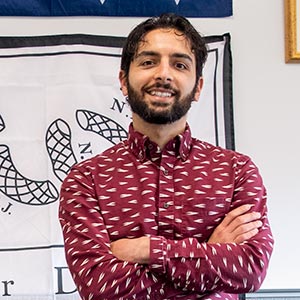 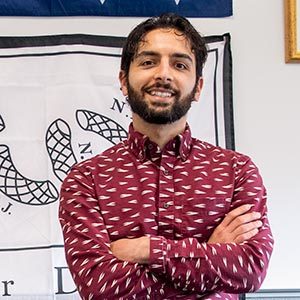 Sourosh Amani joined the Upper School faculty this year to teach World History, and he brings a genuine worldliness to the classroom. He was born in Iran but at the age of six, his family fled Iran seeking political asylum in the Netherlands where they spent five years in a refugee camp. Although life was difficult, Amani has great memories of interacting with children from across the globe, especially playing on their multicultural soccer team. Soccer became a passion he pursued, playing at Berry College in Georgia and afterwards professionally in Switzerland, Canada, England, and Iceland. Today he follows his favorite team, FC Barcelona, coaches our girls varsity soccer team, and recently started training with a competitive men’s soccer team in Alexandria—for relaxation. Whether teaching or coaching, Amani truly enjoys working with young people and feels blessed to be able to combine his two passions in one job. If he could invite five historical figures to dinner for lively conversation and to learn more about life, he would choose Cyrus the Great of Persia, Aristotle, Reza Shah Pahlavi, Dr. Martin Luther King, and, of course, Dutch soccer legend Johan Cruyff. Amani loves spending time with his wife, Erika, their 2-year-old daughter, Mehrsa, and their Golden Retrievers, Luna and Lola. It’s no surprise that he favors watching documentaries, and currently recommends the Netflix series, “Amend,” about the evolving, often lethal, fight for equal rights in America through the lens of the U.S. Constitution’s 14th Amendment. In the future he hopes to travel the world with his family. At the top of his bucket list—South Africa, Japan, Egypt, Australia, and one day when things are better politically, home to Iran.

What is the one thing in the world you would fix if you could wave a magic wand? Poverty, with all the wealth in the world, no one should experience poverty or homelessness.

What one piece of advice would you offer anyone who asks? To make a living out of their hobby, so they do not have to work a day in their life.

What is the best piece of advice you’ve ever gotten? It is never too late to follow your dreams!

For what in your life do you feel most grateful? For my beautiful wife and daughter.

What is the biggest risk you have ever taken in your life? Although it was my parents took the risk of selling everything they owned and leaving Iran, they took it for all of us with no knowledge of what the future would hold. I am truly grateful for the major risk they took to provide a life with more freedoms for my sister and I.