Making the Most of Every Day 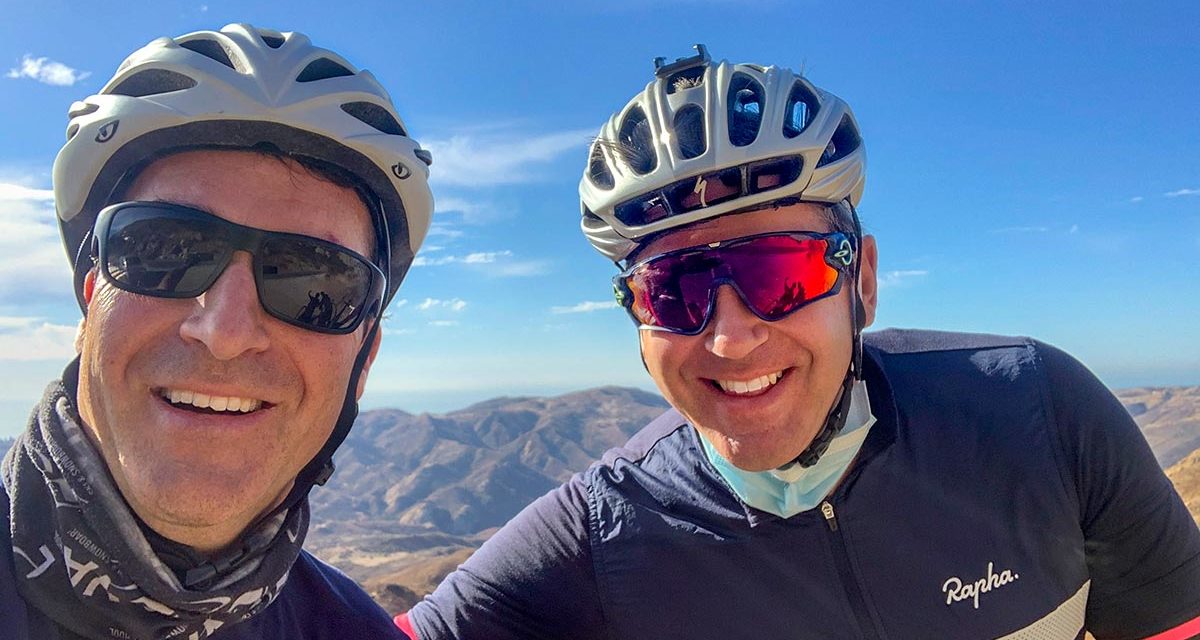 Making the Most of Every Day

Early on a Friday morning, Bobby Augst logs into his computer from his home office in Golden, Colorado. His mission? See what his customers have bought recently. He scrolls through a list of recent customer orders on the screen. A chance to drive on the Autobahn Country Club Speedway. A flying lesson. A hot air balloon tour.

Bobby isn’t in the business of selling stuff— he sells experiences. Specifically, he helps people think outside the box when it comes to giving gifts. Instead of gifting an aunt yet another Christmas sweater, why not send her on a wine tasting? Give your cousin a golf lesson? Send your sister on a helicopter tour? 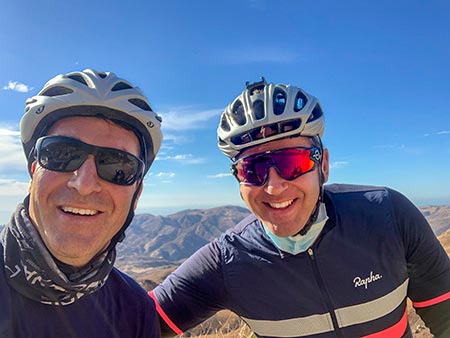 Bobby and Dave in California in December 2020

“The coolest part about my job is that for every single item we sell,” Bobby says, “you’re sending somebody out on a really cool, once-in-a-lifetime experience.”

For more a decade, Bobby has worked at 9 Living, which was started by his older brother, John, in 2005. In March of this year, Cloud 9 became Virgin Experience Gifts after a merger with Virgin Experience Days out of the U.K., and Bobby’s day-to-day is starting to look a little different. Before the sale, Cloud 9 was a bona fide small business, which meant a scrappy group of employees hustling around the clock: “I was doing product management, business development, managing employees, doing a little bit of legal work,” Bobby says.

Now that Cloud 9 is part of a bigger network, Bobby says he’s able to hone in on one task specifically—growing. He’s working on building a roster of corporate clients who want to share the experiences with colleagues and employees. But the company’s core mission to give people gifts they’ll never forget still informs everything he does, every day.

A few hours later, and a thousand miles west in Los Angeles, Dave Warshauer likely has a camera in hand. As a cinematographer who makes commercials, every day looks a little differently: he could be shooting footage for Fender guitars, or in a helicopter filming the Hawaiian coast.

“One day you’re doing something very corporate, and the next day, you’re shooting for Ferrari in Big Sur, racing down a closed Highway One in a Lamborghini. It’s an eclectic bunch of work coming through,” he says, in perhaps the understatement of the century.

Dave’s career officially started in Oahu, Hawaii, when he began filming surfers post-college. That led to a gig shooting surfing films for clothing brand Quiksilver, a stint on the set of the hit TV show “Lost,” and then a salaried position at a production company that shot all of Quiksilver’s North American media. Then he decided to strike out on his own as a freelancer.

“That was tough, because you never know what you’re going to do month to month,” he says. But ultimately, “the phone kept on ringing.”

Bobby and Dave may be miles apart, in different time zones and occupations, but they never let too much time go by without checking in on each other. They’re buoyed by a friendship that started when they were toddlers, was solidified at SSSAS in the Lower School, and has taken them to Colorado, British Columbia, Hawaii, Alaska, and beyond.

It all started with Joe Theismann. At the Montessori preschool they attended, Bobby and Dave discovered they both had Theismann jerseys—and a bond was born. “We both would wear our Theissman jerseys, and then we were like, game on,” Bobby remembers.” Dave says they would coordinate the days they both wore the jerseys so they could match.

Dave started at St. Stephen’s in second grade, and Bobby joined him in third. Since then, neither remembers a year where they didn’t have at least one class together. Both have especially fond memories of their time at the Upper School—when asked to pick a significant memory from those four years, it doesn’t take long for Dave to respond: senior pranks.

“I was the Student Council Association president our senior year, and I helped orchestrate some excellent senior pranks,” Dave explains. And while they won’t share exact details so as not to inspire others to mischief, both Dave and Bobby confirmed that one prank involved deceased cats from an AP Bio lab. “[The school] actually banned senior pranks after our class because we went so big,” Dave says, grinning.

But it wasn’t all fun and games, of course. Both Dave and Bobby say they worked hard in classes, and that the challenge ultimately benefited them both—even if, as Bobby admits, he didn’t love the “school” part of school at the time. “I found [SSSAS] really hard academically,” he says, “but it taught me the value of hard work.” Dave says he felt adequately prepared for college because his classes at SSSAS were academically rigorous, even more so than some of his college classes.

Both say the relationships they built with fellow students deeply impacted their time as a Saint. “I had a super great close knit group of friends, that I still cherish to this day,” Bobby says.

Dave agrees: as they progressed from grade to grade, “everyone was kind of into what everyone else was doing.”

Outside of the classroom, Bobby played varsity lacrosse for all four years of high school, while Dave partook in track, golf, and French club. And both were founding members and co-presidents of the Ski Club.

Skiing means a lot to both Dave and Bobby—it’s influenced their lives so much that it’s almost like the third member of their friend group. Both Dave and Bobby grew up skiing and would travel out west with their families to ski as often as possible. They founded the Ski Club to share their love of it with classmates, and were particularly drawn to one aspect of the sport: ski movies, in which professional freeskiers would take on challenging routes on film.

“Some of our friends were like, ski movies? What’s a ski movie?” Dave says. “But we would just watch these ski movies, and they would transport us to some magical areas.”

Their love of ski movies ran so deep that they worked together to make one for their senior projects at SSSAS. “We shot it all season, and the season prior,” Bobby explains. “And for two weeks, we edited it and put it all together, which was cool.”

It was one of Dave’s first forays into film, which ultimately influenced his career. But skiing shaped their lives in other ways, too. Dave and Bobby were both accepted to and enrolled in the University of Colorado in Boulder. Why Boulder? Its proximity to world-class skiing, of course.

On campus, they were roommates. Bobby majored in business, and Dave pursued a degree in journalism and a minor in film. After graduation, they packed up and drove to British Columbia, where they spent a season skiing at Whistler. Dave then headed to Oahu, and Bobby moved to San Diego for law school.

Bobby prepared for a legal career and took a job as the Deputy District Attorney for San Diego County after law school graduation. But three years in, he was feeling burnt out and a chance arose to join his brother’s start-up company in Colorado. He remembers thinking, “This seems like a good opportunity, and would just be a more enjoyable way to spend my days.” So he quit his job, left San Diego, and joined his brother at Cloud 9 Living.

Chat with Dave and Bobby for even five minutes and it’s clear that they care deeply about making the most of every day. A shared passion for adventure has taken them heli-skiing in Alaska and found them on the Las Vegas Motor Speedway, Dave filming while Bobby held onto his belt so he didn’t fly out the back of the car. When asked what advice they would give to seniors at SSSAS who are just figuring out their life path, both emphasize quality over quantity. 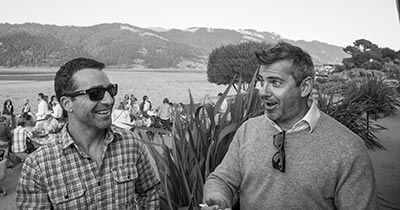 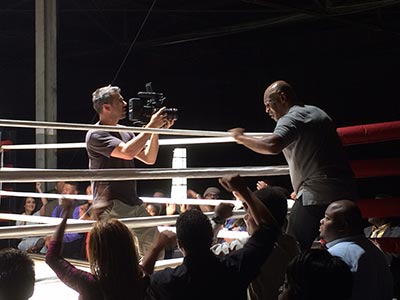 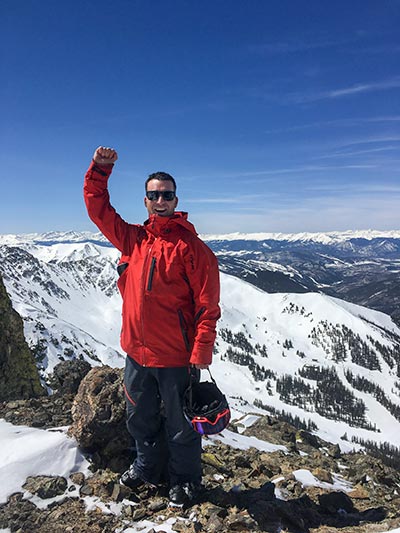 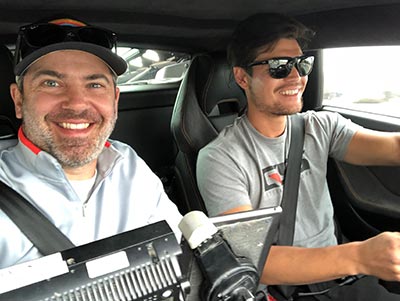 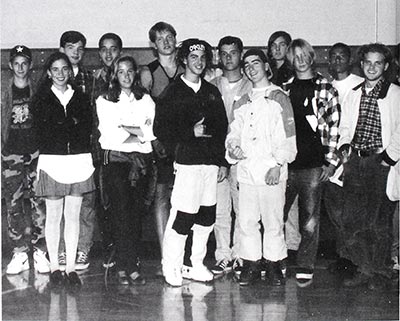 Bobby seconds that notion. “Live where you want to live, and do what you want to do,” he says. “And if you’re not happy with something in your life, make a change.”

Dave and Bobby are living proof that those life mottos can take you to some pretty cool places. Both are now married with kids, and they hope to pass on their adventure-seeking ways to them. Bobby and his wife, Heather, are parents to nine-year-old son James and seven-year-old daughter Frances. Dave married Tracy and has a three-year-old son named Bode. They welcomed their second son, Cameron, in May of last year.

Twenty-six years after their SSSAS Commencement, their shared spirit of adventure hasn’t shown any signs of slowing down.